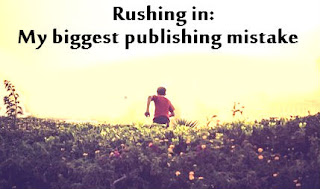 On New Year’s 2014, I made the resolution to publish my first novel before the end of the year. When I made that vow my plan was to self-publish quick and dirty, but then in June, I miraculously had a publisher contact me with interest in Mr. 8. I spent two weeks asking questions, researching them online, rereading the contract, having heart-to-hearts with a published friend of mine, and then I made the decision to sign.

My publisher, Booktrope, operated on a new model, where project teams collaborated and earned a share of the profits rather than any upfront payments. As the author, I was the head of my team and got to choose when my book would be launched. I decided on the week before Christmas. The novel takes place at that time of year, sales are high with holiday shopping, and I’d fulfill my resolution. It all made sense.

What could possibly go wrong?

The main thing I want to tell any writer thinking of publishing for the first time is: don’t rush it.

In retrospect, this was my biggest publishing mistake and it directly led to many of my other problems. I don't just wish that I had taken more time in order to have avoided these difficulties, but there is also the regret that I let publishing become so important that I lost perspective on what was enjoyable to me as a writer.

When I examine the full lifespan of Mr. 8, the moment from the publishing offer to the launch was the most stressful, nerve-racking, discouraging, and thankless part of the whole project. By comparison, the months of writing, fighting blocks, and struggling with plot seem like the golden days of childhood verses publishing’s angst ridden teens.

I’m not suggesting that anyone shouldn’t publish. For many writers publishing is a rite of passage. If it’s one of your goals, definitely fight for it. But it’s probably not going to be the blissful experience you think it’s going to be, so take your time, do it right, and avoid these problems.

Unless you’re self-publishing, the contract will likely be the first step in the publishing process (not including finding an agent, querying and all that other fun stuff, which is for a different discussion). By the time I was presented with the contract, I had read so many horror stories of abusive, unfair, and litigious agreements that my eyes were wide open to the possible dangers. From researching other writer’s experiences on the internet, I had almost come to believe that there had never been a first time author that hadn’t been swindled by their publishing house.

Luckily, this is a skewed version of reality. Most publishers aren’t villains. Most genuinely want to work with authors and put good books on the shelves. But it is a business and all publishers will look to make a profit and minimize risk. And if you’re publishing, then it’s your business too and you should be trying to do the same things. When you inspect your contract pay particular attention to: copyright, rights for other markets (i.e. foreign, film, etc), exclusivity, hidden fees, and profit. Each of these is a vast topic and I cannot call myself an expert in any of them. The internet has lots of information on publishing contracts, so do your research. And as with all things legal, if you’re not sure, consult a lawyer—preferably one with expertise in entertainment law.

In this area, I was fortunate and my contract was fair and quite straightforward. So I dodged a bullet here, but there were others to come.

The importance of fit

In the gamut between self-publishing to traditional publishing with a major company, there are thousands of options on the landscape today. Probably the biggest trick will be finding the one that’s right for you. This is not so much about what avenue can bring the most success to your book, but which one best suits your personality, the level of control you want, and the amount of guidance you need.

In my hurry, I did not factor this in whatsoever. This is not a condemnation of my publisher but of myself and the fact I never thought to ask the right questions or consider how closely I would have to work with this company for the next several months. To Booktrope’s credit, they did everything they said they would and certainly things could have been much worse with another outfit. But that doesn’t mean I didn’t grow frustrated by some of the situations I found myself in.

I wish I spent time doing some serious self-examination before jumping in. I wish I had asked myself: what type of relationship I wanted with my publisher? What level of support did I need from one? How much control did I want over the project? What was I willing to do on my own? And what did I need someone to do for me? A brutally honest look at those answers would have served me well.

And this I’ll admit, I’m too new to all of this to know if such a thing as a perfect fit exists. I’d like to think it’s possible. But even if it isn’t, I believe that knowing ahead of time where things didn’t match up would have eased the aggravation and stress.

When life gets in the way

Life will not get out of your way when you decide to publish. So if you have any say over the publication timeline, it is important to be realistic about it.

Your control over the timeline will depend on the publisher and many will dictate it to you.  In my case, I had near total control over it—big mistake.

Remember my New Year’s resolution about getting a book out by the end of the year? Well, I targeted mid-December as the launch date, less than six months after I signed the contract. In that time, I had to edit the manuscript, twice. Have it reviewed by an editor and a proofreader. Work with a designer on a cover. And build a marketing plan. It was a lot of work and a challenge to coordinate. And I almost made but there were days I felt I was going to have a complete breakdown.

Not only was the process stressful, but life decided to throw me a few curve-balls that made that six month period the most seriously stressful of my entire life. In that short span of time, I was not only preparing my novel for market, I was selling a house, changing jobs, moving to a new city, and coping with a major family tragedy.

I truly hope whatever you have going on in your life while publishing is better than what I had in mine. But it doesn't hurt to prepare for the worst and build in allowances for weeks or months where you wan't be able to devote your full attention to your book.

Despite all that, I fought hard to get it all done. And in the end, I still missed the December deadline because of a bunch of unrelated technical issues I had little or no control over. Mr. 8 came out on February 4th, 2015. Had I been smart, I would have set a deadline for the following fall and given myself the room to do things right without killing myself over it.

It’s a marathon, pace yourself

Publishing a first book is one of the most exciting events in a writer’s life. You owe it to yourself to do everything you can to make it a dream come true instead of a nightmare. It's a journey not suited to a sprint. Slow down, pace yourself, and watch out for all the things in your path waiting to trip you.

But I only have this one experience under my belt, what do you think? Are mistakes unavoidable? Is it better to jump in bravely and get it done? Or is the cautious approach I recommend the right way?

Next week, I’m going to be tackling the important topic of reviews. This is such a critical element in today’s book selling world I will actually be tackling the subject twice. The next instalment will be about getting reviews before your book is launched. And at a later date, I will discuss their importance to your book’s continued success after launch.