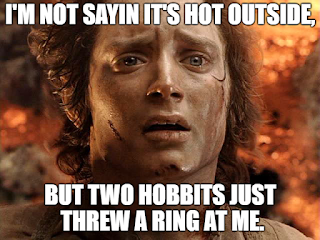 The hottest days of summer were often spent in a darkened room while an ancient air-conditioner rattled in the window and trickled out a weak freon smelling breeze. The blinds were drawn to keep the heat of the sun out and I grew pale reading a novel or typing away on my computer, maybe working on a story or programming a game.

These were my early teenage years and the summers stretched long with one empty, dull day after the next. Boredom existed as a physical creature stalking my every moment. Even the TV provided no relief. These were pre-Netflix days, pre-cable even, way back when network television gave up in May and didn’t put anything new back on until September. One year I remember watching the movie Mazes and Monsters (an old Tom Hanks flick with all the charm of an after-school special) no less than five times on late night TV because nothing else was on. In those summers, there was a glut of time.

Not anymore. That demon of boredom has been fully exorcized. The older I get and the further those summers recede into the dim past, the more obligations and curveballs life throws. This summer is one of the hottest in memory and it’s speeding past like a station wagon on a shimmering highway. Yet in this heat, I find myself working and growing pale in darkened air-conditioned rooms. Mostly on a computer. Occasionally writing.

My newsletter comes out the thirteenth of every month. You can signup for it here
You will only receive the one e-mail a month.