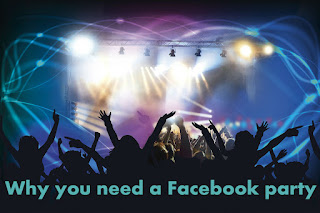 Prior to publishing, Facebook parties were no secret, although I had never attended one. Truth is, I didn't like Facebook and never focused on it much as part of my writer’s platform. I wish someone had told me I was making a big mistake by ignoring this valuable resource. Today, I often think: if only someone had pulled me aside and told me to plan a launch party on Facebook (and really I can’t figure out why no one did).

Since the release of my book, I have attended several Facebook launch parties and even guest hosted at one. My experience has left me convinced that it is an absolute must for any author releasing their book into the wild.

Why do I say that? Because love it or hate it, Facebook is one of the biggest, most used social platforms on the Web. And hosting a party on it is some of the best free advertising you’re ever going to get.

Throwing a Facebook party isn't just about selling your book to those who attend. No doubt that will be a goal, but the true benefit will be in the long term. It’s about seeding goodwill and spreading word of mouth about your book. It’s also about growing the audience for your social platform.

With a little help from your friends


Even running a four hour event by yourself can be a monumental task, so think about asking friends to help.  One of the keys to a successful Facebook party is to keep it moving and to keep your guests involved and active, changing the host every hour or two is a great way to keep up the momentum. And it can have great benefits with audience sharing—you will be introducing your readers to them, while they introduce their readers to your work.

Again, this is where networking with other writers is invaluable. For best effect, ask authors of the same or similar genre to run a “take-over” during your event. If they agree, schedule a time slot lasting between thirty minutes and an hour and help them (if needed) with setting up an event plan.

One incredibly smart idea I’ve seen was when an author had another writer host the party for them and only appeared herself as one of the guest hosts. This was such a great plan because the host was able to freely hype the merits of her friend’s book without it sounding like shameless self-promotion. Think about it, what means more: “I read this book that is being released, and it’s great;” or “This book I wrote is great?” Also, it’s a wonderful way for a first time author with a small following to get a bump from a more experienced writer with a wider following. This of course means finding someone who is either a huge supporter or a great friend, and probably both.


Last weekend, I saw a line stretching half a city block with people waiting in the rain to get a free chocolate. To be clear, it was for a single chocolate. The lesson is: people love free stuff. So don’t forget to have prizes. Giveaways are crucial to getting your guests to show up and stick around. Remember: your friends will be there for you; the new people will be there for themselves.

This will be the area where you will run into costs. Free books and swag can get expensive (this is such a large subject I will be tackling it as the topic of next week’s post). This is another reason to keep the event short, so you don’t have to provide lots of prizes or spread them out too thinly. You can also ask your guest hosts to contribute to giveaways during their take-over. It’s win-win as your guests get a wider variety of free items and your hosts gets to promote their books.

Don’t forget to connect. Make sure you or a guest host remind attendees to go “like” your Facebook page. One nice thing is to invite your guests to post links to their Author’s Pages and ask everyone in attendance to like one another. Personally, I’m not a huge fan of follow-for-follows but in this case it is highly effective. Not only is it a direct way to build your social audience, but when I saw this done, this discussion was the most active of any in the entire event. It drew many of the lurkers out and got them involved.

Although, I have not yet seen anyone do this at a launch party, I would also suggest inviting people to follow each other on Twitter, Instagram, or wherever else you’re trying to grow your audience.

Like all things in this series, this is one thing I will do differently the next time around. I am so sold on this promotional idea, I may even consider having a party in the near future to help restore excitement in Mr. 8.

What about you? Have you run a Facebook party for your book? Have you attended launch parties? What did I miss? I would love to hear from you.