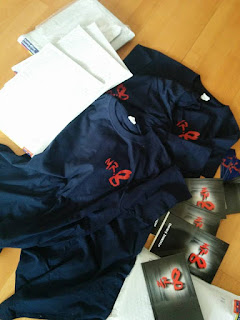 In recent years, swag has become an increasingly important element in book promotions. In some genres, it's an absolute necessity, especially in the environment of a writer’s convention. Romance and young-adult seem particularly gripped with the idea that merchandise equals a book to be taken seriously. But not all genres have embraced it to the same extent. And outside of in-person events, the value of it remains questionable.

What is swag? It’s T-shirts, baseball caps, travel mugs, key chains, pens, fridge magnets, and just about anything else you can put a logo or a promotional image on and give out to fans and prospective readers. It is also ephemera like bookmarks, postcards, bumper stickers, and posters—much cheaper to produce and much more likely to end up in the trash.

Swag is extremely enticing to writers. I know myself, I wanted people walking around with my book on their T-shirt. There is no denying it, merchandise for your book is fun. It's a step toward feeling like a big Hollywood movie. But it is important to understand that unless your publisher is flipping the bill, swag can be a mounting cost that will eat away your royalties.

The High Cost of Swagging

There are deals to be found for getting merchandise printed up, especially if you are willing to compare many dealers online and are willing to buy in bulk.  I was able to find a local dealer that produced custom T-shirts for only twelve dollars a unit, and I’m sure there was probably cheaper out there (the T's would have been cheaper had I bought more). But no matter how little you pay for your swag, these are things you will be handing out or perhaps giving away as prizes, which means it’s all cost and no profit.

There is a justification for the cost as advertising, but is it the most effective form of promotion? From an informal study of articles on the internet, it seems that swag has very little effect on influencing someone to buy a book. And for the eager author dreaming about people wearing, carrying, flourishing, and treasuring these objects emblazoned with their book on it, the costs can easily run into the thousands if not checked.

My advice, look at it as you would any other advertising and assess your need. Will you be attending conventions? Will you be doing giveaways? Then, budget accordingly. What can you afford to spend? And what can you afford to lose? Try focusing on one or two substantial items of merchandise, instead of trying to get a wide variety of objects. Wrote book that takes place in a cafe? Then maybe a coffee cup will be a good tie-in. Is your book in diary format? Maybe a notebook will work?  When in doubt, T-shirts are extremely versatile. Key chains and fridge magnets might seem attractive as a low cost hand out, but remembering the smaller and cheaper the item, the more likely it will end up in the trash.

You give and you give

Aside from conventions, contests and giveaways are the most likely places a writer will use swag. Unlike handouts, these promotions create additional costs in the form of postage and packaging. Remember you are not Amazon and you do not get their delivery rates. When I held a giveaway, postage in some instances was as higher than the value of item I was shipping. One way to keep this expense under control is to limit winners to the region you live in. But if you have an international following this can hurt you. Or make you feel like you are excluding some of your best fans from the promotion.

Contests can also mean additional hassles. What if you’re grand prize winner never gives you their address? This could really take the wind out of your sails as the announcement of the winner drags on for days. Who wouldn’t want free stuff you ask? I had one winner that was so concerned about taxes and duties his government would charge him, he ended up refusing the prize altogether. Again limiting the area to which you ship will help avoid this, so will limiting the eligibility for entering the contest to eighteen and over (adults are more likely to be willing to pay additional fees). But again, who are your fans? And who are you hoping will spread word of mouth about your book?  These limitations could be completely counterproductive for your campaign.

This discussion is about swag, but the same points hold true for giving away free copies of your book.  Books are heavy and expensive, offering signed copies as a prize is a lovely idea but will ultimately cost you when it comes time to send them out.

So by now you’re probably thinking, why should I buy this stuff? Because despite the drawbacks, there are benefits to swag. As I mentioned at the start, at some writing conventions swag is practically a requirement. If you plan on spending the money to attend to promote your book, you need to go all in. Sure, most of the people who go home with your carefully crafted piece of merchandise in their loot bag will never buy you’re book, visit your website, follow you on Twitter, etc. But some will, which is more, than if you show up empty handed.

Also, giveaways do work, they just don't sell many books. The goal of a giveaway or contest should be directed at expanding your network. A requirement for entry needs to be a Facebook “like,” a Twitter “follow,” or a subscription to your blog. The idea is to have these people receptive to future promotions and campaigns. But don’t worry it will help sell books too.

When I launched Mr. 8, my main promotion was a contest I organized on Facebook. The campaign lasted a week and in that time I grew my Facebook following by approximately 250%. About 8% of participants went on to buy my book (that I know of). Now to be honest, the numbers I’m talking about are not big, but I was a first time author with almost no web presence, when I started this.

Your following will make a huge difference in the effectiveness of handouts or contests. If you're already a popular author, you could have readers clamoring for your merchandise. You might even be able to charge money for it. But for most of us, this is all about getting noticed not expanding an empire.

The lesson I learned

So, was my contest a marketing success? No. But it could have been. My problem was I spent too much. The budget I gave myself was too high for the results I received, and postage ended up busting that budget.

What I did wrong was I gave out too much stuff. I had eight prizes containing signed copies and T-Shirts. At most, I should have had three. And I failed to include e-books in my contest . These are wonderful, low cost, zero postage prizes that I should have utilized. I should have also given out signed postcards as a lower level consolation prize. The postage on just one of my prize bundles would have covered sending out dozens of those lightweight, envelope sized items. I think if I had done these things differently, I would have achieved the same effect, and could have turned the promotion into a success.

So do get the swag, just been very aware of the costs and your goals. Also realize that to a large degree producing these items are for your own benefit. People can’t be wearing your T-shirts unless you create them. And there is satisfaction and value in that.