Here We Go Again... (Tales of a De-Published Author Part 3) 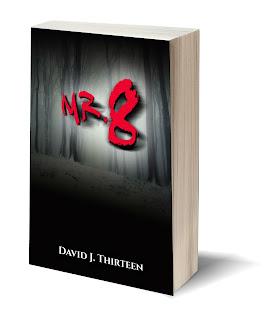 For those of you following the saga of my de-publishing, it is finally over (I hope).


To recap: in April my publisher, Booktrope, announced it was going out of business and on June 1, 2016 my book Mr. 8 was pulled from all retail outlets. I was faced with many choices. It became clear to me that the best thing for me to do was accept the fact that it would no longer be available and take some (considerable) time rewriting to produce a better (my writing has improved since it was first put out) and unique version of the story. Since sales had stagnated prior to Booktrope's decision, a new version along with a well planned re-launch might create increased interest. But there was one major problem with that option: time. There are other projects I was hoping to move forward with before the end of the year, projects that would have been postponed if I went forward with a full on rewrite. Setting these projects aside to go back and work on a "finished" book was all a bit heartbreaking.

So I compromised. I've re-launched the same book that Booktrope had published. I did give it another proof read to tidy up a few typos my proofreader missed, but otherwise it is the exact same book. The pros of doing this was that it only ate up a month of my spare time, it keeps a presence in the retail world, it allows the few readers who want a copy the ability to get one, and it leaves open the possibility of doing a major rewrite and re-launch at a later date.

I started out greatly ahead of most self-publishers. I had a fully edited manuscript, which had been formatted for print and ebook publication. I had a professionally designed cover. And the book had already been registered with the Library of Congress. What I didn't have was an ISBN or the rights to the photography used in the cover. These were owned by Booktrope and weren't transferable. Also, I had no means of distributing the book.

In my research, I learned that an ISBN is not very important these days if one is planning to sell exclusively online, although it does limit your sales channels. Luckily, being a Canadian resident (this will come back to haunt me, see below) meant getting an ISBN was both easy and free. Unlike in the US, where ISBN numbers are controlled by a private company, the government controls them in Canada. I filled out an online form, waited two weeks to have an account set up, and now I can generate ISBN numbers for my self-publishing whenever I want.

The photo art wasn't much of a problem either. It was obtained through ShutterStock so I just needed to setup an account with them and purchase the most basic package, which included the rights to two photos. The package normally cost $30 but as a new member I got the discounted price of $23.

The big decision and hassle was distribution. This is a complicated web. I read several articles talking about ways to maximize profit. This involves setting up accounts with multiple retailers and print on-demand companies and reading all the fine print to make sure your book is being sold at each location with the lowest fees and percentages being taken off. However, this works alright in the US, but as a non-US resident (see, it came back to haunt me) this strategy opens up a myriad of problems.

Take CreateSpace, one of the most common print-on-demand companies you're likely to use. It's owned by Amazon so it grants you the best opportunity for profit with that mega-retailer. But their payment plan for non-US residents is beyond disadvantageous. You can only set up direct deposit with them if you have a US or EU bank account, everyone else gets paid by check (or cheque, if they're sending it to Canada). But they will only cut those checks once you've reached one-hundred units of whichever currency the sales are in. Sell a book in the UK, then you'll have to wait until you've earned 100‎£ before you get paid. Sell in Japan, wait to earn 100‎¥ and so on. Then they'll send you a check in that currency, which will me paying foreign currency fees when you try and cash it. And if you never earn a full one-hundred units of a currency, guess who pockets the money.

There's probably a way around this and I'm sure more industrious and business savvy people have worked their way through it so it is not so onerous, but I'm not expecting to get rich off sales and I wanted things to be simple. So I decided to distribute solely through Ingram Spark.

Ingram Spark is the junior arm of the huge book distributor Ingram designed for very small and self-publishers. The pros of going solely with them were: it was one stop shop, they have a expansive global distribution, they offer the option of receiving payment through PayPal, and unlike Amazon and CreateSpace (and many of the others) they don't treat earning like royalties so they do not withhold US income tax at source.

But there were a few cons as well. There's a fee of $49 per book, which is minor but more than the free services like CreateSpace and Lulu. There is also a huge learning curve for getting a book's setup files in the format they accept, as well as for understanding the whole distribution price and discount system.

The bulk of the time I spent in republishing Mr. 8 was spent getting those files just so. It took a lot of trial and error partially because I had no experience using tools like inDesign and Photoshop. I was tempted at a few points to pay someone to do it for me, but I got it done in the end.

Ingram Sparks allows you to set the price for the physical book and ebook in every major market they distribute to. This took a little finagling with currency exchange to ensure I was earning a little profit in each of the areas but wasn't too bad. The choosing of discounts was another matter and something I made a misstep on. The recommended retailer discount is 55%. Most retailers will not stock books in their brick-and-mortar stores with any discount less than 55%. I selected this discount because, hey it was recommended after all. But until I actually started visiting stores and pitching my book to the manager, it was highly unlikely any store would ever choose to stock my title. So by offering such a large discount, I was essentially giving away a huge percentage of my profit to these internet retailers. Shortly after the launch I figured this out and updated it to offer them the minimum discount of 30% or 35% (depending on the region). Should in-store sales ever become an issue, I can change it back for that particular market.

So now Mr. 8 is self-published. It no longer has a publisher behind it, but it is now available through many more retailers than it was under Booktrope, including the Canadian giant Indigo (having a foot in the local market feels good). One of my biggest concerns was the cost would far outstrip any potential revenue, but the whole business of self-publishing cost me a grand total of $72(US). I will still need to pay a percentage of future earning to my cover designer, editor, and proof reader as per the team contract we signed, but if I keep payout to once or twice a year through PayPal it shouldn't be a labor intensive endeavor.

And now that I've done it and have self-publishing experience, I have more confidence moving forward with one of those other projects I mentioned earlier. Hopefully, soon I'll be putting out a novella to join Mr. 8 on the electronic shelves.